Buena Park’s Movieland Wax Museum is a ghost itself 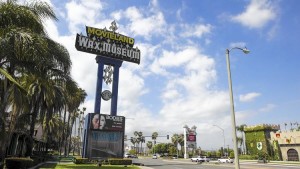 Movieland Wax Museum, which closed in 2005, continues to beckon motorists in Buena Park.

The old sign still looms over Beach Boulevard, a 20th century landmark that, like the museum it once trumpeted, held out past the dawn of multiplexes and YouTube.

The Movieland Wax Museum, which closed in 2005 after 43 years in business, continues to beckon motorists who drive the main thoroughfare of Buena Park’s entertainment district. The tall sign in front, featuring the museum’s name surrounded by white diamonds atop a spindly blue base, has stayed in place even as wax sculptures were auctioned off and new tenants moved in.
wax museum
Rose and Joe Williams of Lebanon, Ore., view a Laurel and Hardy scene at Movieland Wax Museum in 2005. (Don Kelsen, Los Angeles Times)

On a recent warm afternoon, Mario Orozco, a retired Buena Park resident, sat at the Starbucks below the sign and recalled his days visiting the museum as a child. Back then, he said, the opportunity to see celebrity likenesses up close was a rare treat. And that massive sign broadcast the message that something special resided beneath it.

“To me, it’s like the big A at Angel Stadium,” Orozco said at an outdoor table, looking up. “It’s one of those things that’s an icon. In Buena Park, it is.”
lRelated
Wax museum at San Francisco’s Fisherman’s Wharf to close

As R.E.M. once sang, though, the 20th century has gone to sleep. Many of the stars once portrayed in the museum’s cool confines are likely to have small audiences on Netflix, at least among millennials. And as Buena Park officials look to sweep out relics along Beach Boulevard, from former tourist spots to shuttered motels, the future of that curving blue sign has become a question mark.

For two years, Premier Exhibitions has installed two temporary shows in the facility — one focused on the Titanic, the other on the human body. Now, a new permanent tenant is set to move onto the property: Los Angeles-based Butterfly Pavillion plans to open an elaborate complex featuring an atrium full of butterflies, a movie theater and more next year.

“They’re probably going to change the face of the sign,” said Ruben Lopez, the city’s economic development administrator. “We’re going to see if we can negotiate to keep ‘Movieland’ in there somewhere.”

“Where they wax eloquently.”

So the Los Angeles Times proclaimed the museum when it opened in 1962, offering about 60 sculpted figures that represented the first half-century of cinema.

Actress Mary Pickford, one of the biggest stars of the silent era, showed up to dedicate the grounds on opening night. Entrepreneur Allen Parkinson treated the museum’s debut like an actual movie premiere, complete with searchlights, bleachers and stars arriving in limousines.
cComments

@Astro Shecky – I should have mentioned that I was around 19 years old at the time I went there. I now know who Mario Lanza was, and thus don’t get your remark at all.
jennisis
at 8:02 PM May 27, 2015

The museum drew as many as 1.2 million visitors a year during its peak of popularity, in the 1960s, and it remained a prestigious spot for celebrities for decades after. The cement handprints still preserved in front of the building include those of Carol Burnett, Marcel Marceau, Ray Charles, Ed Asner and the leads of the “Batman” TV series.

The museum kept current with celebrities over time, as Kate Winslet and Britney Spears took their places along the likes of Mae West and W.C. Fields, but attendance and interest diminished nonetheless.

With the museum now long closed, that sign over Beach Boulevard sometimes poses a problem.

Sara Copping, the executive director of the Visit Buena Park tourist bureau, often gets calls asking if the museum is open or what its hours are. The sign may represent a treasured part of history for locals, but those from outside the neighborhood are often confused about the lack of a wax museum under it.

Copping, who joined the bureau staff a half-decade after the museum closed, said she would be happy to see the sign amended to focus on the new tenant.

“I think it absolutely would help with eliminating some of that confusion from tourists in the area,” she said.

One who doesn’t entirely mind having the sign in front is Heather Johnson, the assistant general manager of Premier Exhibitions.

Since her temporary exhibitions moved into the museum space two years ago, she said, past visitors have stopped by the property and shared memories.

Sometimes, they’ve even brought their children with them, only to find the museum is long closed.

“We get people who used to work here — a lot of those,” Johnson said. “And people who just remember it as a child. It was a good experience for them.”

Often, though, the visitors pay admission for the current shows instead. In “Titanic,” they can view authentic artifacts from the ocean liner’s 1912 voyage, which Movieland once portrayed in a scene. And in “Bodies,” they can view specimens from actual cadavers — a fitting choice, perhaps, for a building that once prided itself on making still figures look like flesh.